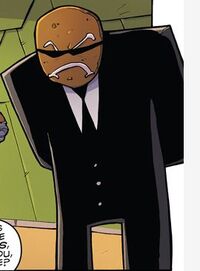 Agent Breadman is a bodyguard to Director Lamode, the director of the U.S. Food and Drug Administration.[1]

When the FDA became short staffed due to so many members becoming injured during a raid on the Collector, Agent Breadman became the acting director of the FDA. He called in Deshawn Berry to become John Colby's new partner.[2] Breadman soon sent Colby out to find Poyo as he has been missing for several days.[3]

Retrieved from "https://imagecomics.fandom.com/wiki/Breadman_(Chew)?oldid=53201"
Community content is available under CC-BY-SA unless otherwise noted.