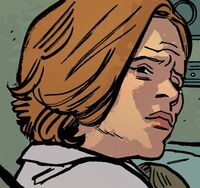 When Kyle Barnes and Reverend Anderson found Sherry in Charleston, they discovered their suspicions were true, she was still possessed by a demon. When they attempted to exorcise her, she was placed in a comatose state. Brenda and Roy rushed to her side to help protect their little girl. They thanked Kyle and Reverend for finding her but were not told that they had caused the comatose state by their exorcism.[1]

Retrieved from "https://imagecomics.fandom.com/wiki/Brenda_(Outcast)?oldid=62201"
Community content is available under CC-BY-SA unless otherwise noted.