Edit this page
The Governor 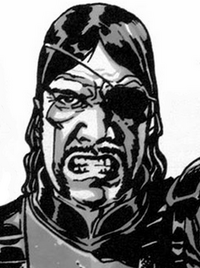 Self-proclaimed "Governor" of Woodbury, Brian, a.k.a. Philip, Blake was once a fair and even leader, making difficult decisions and doing everything within his power to ensure the safety of the growing community's residents. Somewhere along the way, Philip became known only as the Governor, employing his sadistic methods of leadership to enthrall the populace of Woodbury with staged arena battles and threats of ruthless reprisals should they fail to heed his every command. He had a daughter, Penny, who at some point died and became a zombie. Instead of killing what remained of her, Philip kept her chained inside his apartment, feeding her with meat.

When his scouts discovered Rick, Michonne, and Glenn outside the security wall, they were escorted at gunpoint to meet the Governor, who gave them the worst first impression: he told them that they feed strangers to the zombies they use in the arena. Seeing through the trio's lie that they were constantly moving without a camp, the Governor demanded them to reveal their location so he could pillage it for supplies and victims. Horrified, Rick denied him the information, and the Governor responded in kind by chopping off his hand, imprisoning Glenn, and raping and torturing Michonne repeatedly. He then gave Rick's hand to his zombie daughter Penny.

The Governor cunningly tricked Rick into revealing that his point of origin was indeed a prison. Healed from his forced amputation, Rick escaped with Martinez's help, along with Glenn and Michonne. Seeking revenge upon the Governor, Michonne caught him off guard in his apartment. She brutally tortured him, severing his arm, popping his eyeball with a spoon, among other things. Michonne left when the Governor's men came to his apartment. After getting through the barricaded doors, the soldiers were horrified to find their governor barely alive after the torture he suffered.

Bob, a doctor from Woodbury, helped the Governor recover, and once he healed, he set his sights upon the prison, mounting a massive assault. Distorting the truth to paint Rick's group as some savages, he convinced his soldiers and other citizens to join in the battle. His envoy totaled eight vehicles and a tank. Clad in Rick's riot armor, eye patch covering his empty socket, the Governor ordered his forces to open fire. From the top of a guard tower, Andrea systematically picked off the Governor's citizen soldiers with her sharpshooting, forcing his retreat. Michonne and Tyreese went on the offensive, tracking the Governor back through the countryside. They were ambushed, and Tyreese was taken prisoner while Michonne escaped. With the upper hand, the Governor returned to the prison.

As Rick and the survivors looked on from behind the fences, the Governor revealed Tyreese, bloodied and beaten. Threatening to behead Tyreese unless they surrendered and opened the gates, the Governor raised Michonne's sword and waited for their response. Rick rejected his demands, just like Tyreese yelled him to do, and the Governor severed Tyreese's head with repetitive blows to his neck, until it rolled freely to the grass. Frustrated that his merciless act did not bend the survivors to his will, the Governor returned to his awaiting soldiers and told them that these men are savages and that they shot their own man to avoid negotiating with Woodbury. Of course, this was a lie to put every soldier on his side.

Going for broke, the Governor initiated a final assault on the prison. They incurred heavy losses when Billy Greene began lobbing grenades from the guard tower. Andrea, who previously escaped from the prison, returned guns blazing and killed more of Woodbury's soldiers. Irrational, the Governor drove his tank through the gates of the prison and stormed the grounds. With Rick's forces now in terrified retreat, the Governor killed several of the opposition including Alice, Billy, and Hershel. He then ordered a soldier to fire on Lori. When the soldier, named Lilly, realized that her shot had killed both mother and her infant daughter, she turned her rifle on the Governor and shot him through the head at close range. She then kicked his body into an onrushing horde of the undead, where his body was devoured.