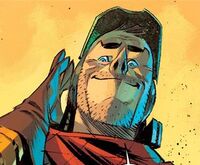 Brian McKay grew up very close with his brother, Grant McKay. However, when Grant discovered his mother was cheating on his father, he told his father. His father soon committed suicide. As the two boys grew up, Brian did everything he could to stay in his mother's good graces. As a result, Grant was left neglected and emotionally abused.[1]

As an adult, Brian mysteriously appeared on Godworld and saved Grant from being attacked by a Goongaloonga monster, a monster that eats children for telling secrets. After protecting his brother for a while, Brian admits he was weak as a child too. He knew what his mother was doing but turned his head the other way. He didn't want to be on her bad side. He appealed to her sense of normalcy while Grant rebelled against her. Hearing Brian's encouraging words, Grant broke free from the Goongaloonga's belly and freed his family. He pledged to his wife that he would put their family back together. Brian asked if Grant was ready to move on as they walked through a bright light.[1]

Retrieved from "https://imagecomics.fandom.com/wiki/Brian_McKay_(Black_Science)?oldid=51096"
Community content is available under CC-BY-SA unless otherwise noted.