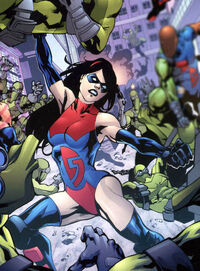 Supervision (real name Bridget Flynn) is a comic book superhero, a member of the superhero team Dynamo 5, which appears in the monthly series of the same name from Image Comics. Created by writer Jay Faerber and artist Mahmud A. Asrar, Scrap first appeared in Dynamo 5 no.1 (January 2007).

Bridget Flynn, an NYU Film School graduate working at a Hollywood, California movie theater, was the fourth of the five children contacted by Warner. Gathering all five of the children together, Warner exposed them to the same unidentified radiation that gave Captain Dynamo his powers forty years earlier, unlocking their powers. Bridget inherited her father’s superhuman strength. Donning a costume with the same color design as her father’s, Bridget took the codename Scrap, and works to protect Tower City with her newly discovered brothers and sisters, whom she is still getting to know.

Recently Bridget and her siblings lost their superhuman powers, and in an attempt to restore them, assumed powers that were previously exhibited by another sibling. In Bridget's case, she assumed the vision related abilities previously belonging to her sibling Hector Chang.

Retrieved from "https://imagecomics.fandom.com/wiki/Bridget_Flynn?oldid=68158"
Community content is available under CC-BY-SA unless otherwise noted.