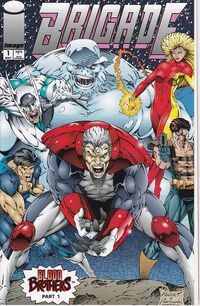 Brigade was a comic-book published by Image Comics and later by awesome entertainment created, plotted and originally written by Rob Liefeld and first illustrated by Marat Mychaels as a spin off to the then popular youngblood.

The original team was led by Battlestone, who had been a former member of Youngblood, as well as a member of Image Comics' 'Golden Age' team The Allied Supermen of America. Having been expelled from Youngblood following the deaths of several Youngblood members who at the time were under his command, he later went on to form Brigade alongside brothers Seahawk and Coldsnap, using their newly inherited vast wealth to finance the team, starting what was at first a pale imitation of a real team. The proper brigade team came together after the deaths of many members during the miniseries at the hands of the villainous Genocide,or shortly thereafter. That incarnation of the team was killed off during the Extreme Sacrifice storyline, one of Extreme Studios' company-wide events. They were replaced by more recognizable characters from the Image Comics universe, including Jim Valentino's Shadowhawk and Erik Larsen and Gary Carlson's Vanguard.

A new incarnation was brought forward in a one-shot published by Liefeld's then-new company Awesome Entertainment. This new version featured such characters as Jeff Matsuda's Ka-Boom and Youngblood's Badrock.