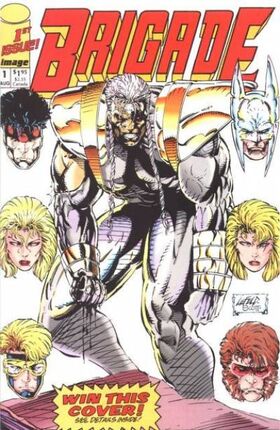 Battlestone is jogging along his beachside Malibu HQ, when he encounters the brothers Seahawk and Coldsnap fighting. Battlestone quickly breaks up the tussle when a Code Red comes in from D.C. Terrorists have taken over a building, threatening to blow it up. With Youngblood nowhere to be seen, Stone decides he and his team should take action.

Brigade makes short work of the terrorists, but no explosives are found. Suddenly an unaccounted for terrorist appears and leads Stone on a chase. When captured, he reveals that he is the bomb, and detonates. The team, safely away, fear Battlestone has perished in the explosion, but he rises safely from the building's wreckage.

All of this has transpired with a running commentary by an unknown party. With Battlestone's survival, the observer is revealed to be an alien named Genocide. He concludes that this Brigade will make worthy opponents for his might, and instructs his ship to head for Earth.