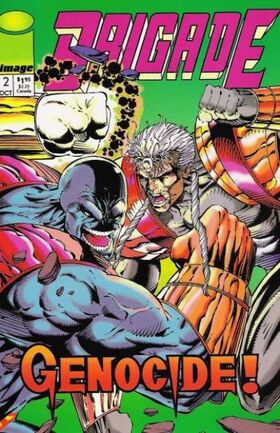 Appearing in "Eve of Destruction"

Plot Synopsis for "Eve of Destruction"

The alien Genocide is wreaking destruction on the streets of Los Angeles, demanding that Brigade challenge him. When the team does arrive, Genocide shows off his knowledge of the various members, taking them down one by one. Battlestone appears to get the upper hand, however, knocking Genocide out. But as the team debates what to do with the alien, Genocide revives and renews his attack, although with his universal translator now damaged Brigade can no longer understand him.

When Brigade continues to humiliate him, Genocide resorts to toppling a building in order to distract them. Atlas props it up, but moments later he and the rest of Brigade vanish in a flash of light, and the building collapses. Genocide believes Brigade to have been killed in the collapse, but soon he too is beamed away. Brigade now finds themselves in an arena on Genocide's homeworld.

A strange being warps into G.A.T.E. Headquarters. He produces an orb - a Genetic Fusion Module - and attempts to use it with G.A.T.E.'s own genetic matrices. The orb explodes, damaging the being's ability to warp back out. But his mission was a success, for a powerful woman has appeared. She does not recognize the being, but agrees to help him escape the building. An alarm sounds, and G.A.T.E. security rushes to the lab.

Retrieved from "https://imagecomics.fandom.com/wiki/Brigade_Vol_1_2?oldid=71632"
Community content is available under CC-BY-SA unless otherwise noted.