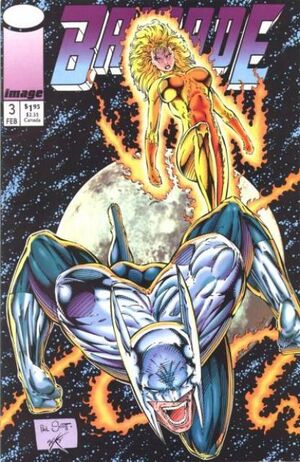 In the arena, Genocide's people attack Brigade en masse. The team manages a brief escape when Thermal blasts a hole through the ground, leading them into a sewer. Unfortunately, a gruesome monster inhabits those tunnels. A short fight later, though, and the team is back on the surface.

Immediately the team is attacked again, this time by a trio called The Factor. Although The Factor have orders to bring Brigade to the Magistrate, Battlestone refuses to be taken alive. But just as the final blow is about to be struck, the fight is interrupted by the arrival of the freedom fighters, Birds of Prey.

Retrieved from "https://imagecomics.fandom.com/wiki/Brigade_Vol_1_3?oldid=21231"
Community content is available under CC-BY-SA unless otherwise noted.