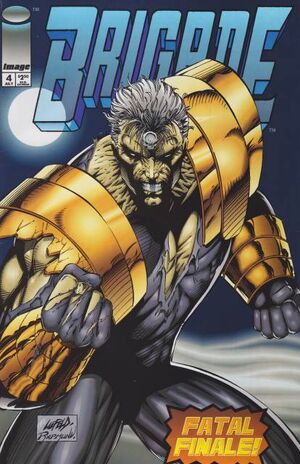 Although the Birds of Prey have just saved Brigade from The Factor, Battlestone is reluctant to trust the newcomers. He is left with little choice, though, when the imperial guard finds them yet again. Fighting through the imperial forces, the two teams are led back towards the citadel, where Genocide is waiting for them. Genocide challenges Battlestone to a one-on-one match, which he exacts by opening the floor and dropping himself and Stone into The Pit.

The two combatants do not fight alone for long, for soon Brigade and the Birds of Prey burst through a wall to join in. Nevertheless, Battlestone insists on fighting Genocide himself, and leaves the teams to take care of the guards. Genocide, however, attempts a sneak attack against Stone, which misses and hits Atlas instead, killing him.

In a fury Battlestone pummels Genocide, but Talyn stops him just short from killing the prince. The surviving members of Brigade board a ship and barely manage to escape the citadel, heading for open space, and Earth.

Three months later, a couple of men at the Pentagon wonder as to Brigade's disappearance. If they should reappear, though, the order will be given to send the Bloodstrike team after them.

Retrieved from "https://imagecomics.fandom.com/wiki/Brigade_Vol_1_4?oldid=65071"
Community content is available under CC-BY-SA unless otherwise noted.