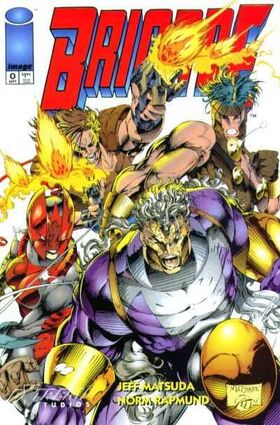 Appearing in "In the Beginning..."

Plot Synopsis for "In the Beginning..."

In 1991, the first Brigade team consisting of Battlestone, Boone, Kayo, and Lethal raids the Japanese home of Yakuza boss Tatsuo Soroyama.  While the others battle and defeat Soroyama’s armored guards and henchman Warcry, Lethal slips inside and kills Soroyama.  Kayo suggests they destroy the body, but Battlestone refuses. He wants others to know Brigade is responsible so as to bolster their reputation.  Two months later, Halo Corporation CEO Jacob Marlowe (a.k.a. Emp) hires Battlestone to steal a mystical gem from a U.S. government facility in Norfolk, Virginia.  Joined by Hacker, Brigade infiltrates the base only to be met by Youngblood.  The two teams fight until Lethal throws a smoke grenade, and Battlestone orders Brigade to retreat.  Afterward, Marlowe refuses to pay Battlestone a kill fee for the job, and a frustrated Battlestone dismisses the team.  Six months later, he and Kayo see a news report on the death of wealthy marine biologist Bernard Barros.  They learn Barros’s sons have superhuman powers, and Kayo suggests Battlestone approach them about funding in exchange for training in the use of their abilities. A week after that, Battlestone visits the Barros brothers in Malibu to make the offer.

Bridging the gap between Youngblood #0 and the first issue of last year’s Brigade mini-series, Brigade #0 chronicles the sequence of events leading up to the formation of the Brigade team, including Battlestone’s first confrontation with Youngblood and Shaft! Guest-starring Emp, of Jim Lee’s WildC.A.T.s.