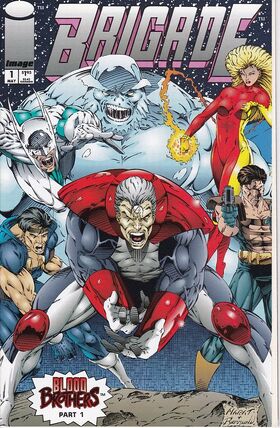 Appearing in "Blood Brothers part 1: A Sort of Homecoming"

Plot Synopsis for "Blood Brothers part 1: A Sort of Homecoming"

After three months in space, Brigade returns to Earth and lands their spacecraft in their Malibu headquarters.  Blaming Battlestone for Atlas’s death, Stasis quits the team.  As she leaves, she is shot in the head and killed by Battlestone’s brother, Cabbot Stone.  He has come with his team Bloodstrike to capture or kill Brigade.  In the course of the ensuing battle, Shogun blasts Coldsnap, damaging the apparatus that regulates his powers which then rage out of control. Deadlock shoots Seahawk multiple times, and Fourplay subdues Kayo.  Battlestone defeats Cabbot and Tag and, with the aid of Martin Grant, escapes with Thermal, Coldsnap, and Stasis’s corpse.  They fly to the L.A. branch of G.A.T.E. International where Battlestone calls in a favor with a scientist there, Dr. Sandler.  Battlestone broods over multiple deaths he has been responsible for, but he angrily refuses to discuss it with Thermal.  Sandler treats Coldsnap and places Stasis’s body in a nutrient bath connected to special equipment.  Acknowledging the team’s reduced numbers, Battlestone leaves to recruit reinforcements. In Silicon Valley, a man named Boone infiltrates a hi-tech facility guided via radio by his associate Hacker.  Once Boone defeats the last of the facility’s security guards, he turns to find Battlestone standing with Hacker.

Retrieved from "https://imagecomics.fandom.com/wiki/Brigade_Vol_2_1?oldid=73250"
Community content is available under CC-BY-SA unless otherwise noted.