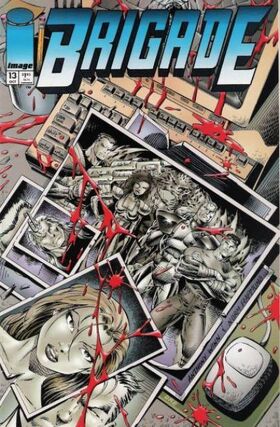 Seahawk tries to apologize to Thermal for his crabby behavior in Japan, but she nervously blows him off because she is writing her secret exposé on the team.  She describes the origin of Brigade as Battlestone’s mercenary group and his subsequent recruitment of the Barros brothers.  In it, she recalls how she agreed to go undercover in the team for this article, was transformed into a superhuman by a Youngblood scientist, and then recruited by Stone.  Meanwhile, Battlestone trains with Crucible and Lethal, and Coldsnap suggests killing Stone to Kayo.  Thermal writes about Stone’s past, from his membership in the Allies in World War II through his leadership of Youngblood and founding of Brigade.  Feeling guilty about betraying the team, she changes her mind and decides to delete the story, but Boone catches her and demands she give him a copy.  She refuses, and they fight, but Boone wins.  He burns the article to a disc just as Battlestone, Coldsnap, and Seahawk catch him in the act.