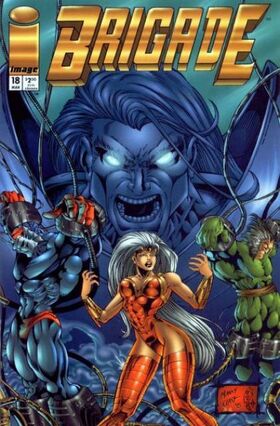 L’Xander dispatches the mute assassin Radikill to eliminate Seahawk.  At his office, Seahawk confesses to Glory that he fears death is coming for him.  In Neuport, Roman’s aide Hyaline identifies the terrorists who aborted their attack as the Cult of Aquon and leads him to their base, revealing himself to be a member. The Cult ambushes Roman, but he fights them off.  As Shape watches, their leader Gillorian appears and teleports away with Hyaline.  Later, Supreme awakens in a lab to Cult scientist Landro draining his body of energy.  Landro tells Shape that Supreme does not have enough so she must find more.  In New York, Glory, Vanguard, and his robot Wally enter secret tunnels beneath an Amazonian church to pursue a lead.  In Munich, Shape takes control of Troll, has him carry Shadowhawk, and teleports them to Landro’s lab.  Landro begins draining Shadowhawk and orders Troll’s death, but Troll breaks free.  He fails to escape, and Shape shoves him out an airlock into the ocean depths.  Glory and Vanguard check in with Seahawk as they make their way through the tunnels.  Outside Neuport, Gillorian is negotiating with L’Xander when Roman attacks, having found the Cult’s hideout.  Cult members subdue Roman, and Gillorian prepares to execute him, but L’Xander wants him alive.