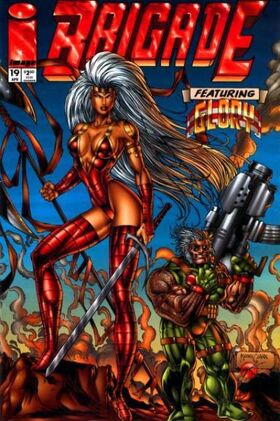 In Neuport, Cult of Aquon members rush to watch their leader Gillorian execute Roman.  In the tunnels, Glory and Vanguard discover that one tunnel leads to Neuport.  In New York, Radikill attacks Seahawk in his office.  Shape kills Gillorian before he can kill Roman and convinces the Cult that Roman is needed alive.  Roman flees, but Shape catches up to him and points him toward Troll who is about to drown. Roman gets Troll into a tunnel and revives him.  In Manhattan, Shape recruits Tremor by helping him find a missing girl.  In the tunnel, Glory and Vanguard meet up with Roman and Troll, unaware that L’Xander is monitoring them.  Seahawk survives Radikill’s assault and realizes he has inadvertently sent Brigade into a trap.  He radios Glory to warn her, but L’Xander takes control of Troll and forces him to subdue her and the others.  L’Xander then has Troll bring them to Landro’s lab.  After securing the allegiance of other cults, he drains energy from the members of Brigade and uses it, along with the cults’ psychic energy, to sever the massive cables holding Neuport to the seafloor.  Shape and Tremor are inside one as Neuport rises to the surface and into the air near New York.