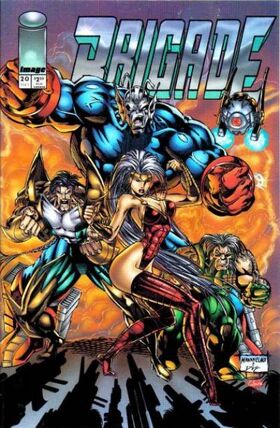 As Neuport hovers over New York, L’Xander mollifies Landro by declaring him the new leader of the Cult of Aquon.  Shape reveals to Seahawk that she tipped off the U.S. government about cults working together and pointed Glory to the tunnels into Neuport.  She also divulges that L’Xander belongs to a group called the Wheel founded by Troll 3,000 years ago.  Troll briefly asserts himself and attacks Landro, but L’Xander regains control of him.  Seahawk flies Tremor, Wally, and an armored ally into Neuport and Landro’s lab.  As they battle Cult henchmen, Troll removes L’Xander’s control device and frees Glory and the others.  L’Xander takes control of Roman and has him attack Shadowhawk. Though weakened, Shadowhawk refuses to flee, bests Roman, and removes his control device.  As the battle rages, Landro breaks the alliance with L’Xander and declares his intent to conquer the surface world, but the armored mystery warrior incinerates him.  With Landro dead, the remaining Cult members surrender, and the armored warrior flies away. Troll endorses the new Brigade, and Roman, Shadowhawk, and Supreme all join.  Tremor refuses but says he will help if really needed.  In Seahawk’s office, the armored warrior removes her helmet, revealing herself to be Shape, encourages Seahawk to introspect, and leaves.  She then joins L’Xander aboard his spacecraft just as he secures the allegiance of two more cults.  Seahawk continues to fear the future.