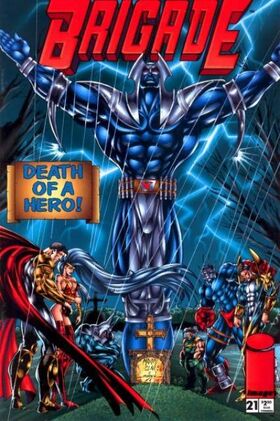 An armored villain and his creature Drakkus slaughter the workers on a Barros Oil rig off the New Jersey coast.  Calling himself Haunt, he seeks revenge on Seahawk.  In New York, Glory finds Troll saying his goodbyes at Shadowhawk’s grave. Afterward, the two are riding in a limo when Haunt and Drakkus attack.  Haunt subdues them both and tells Glory to warn Seahawk.  In Washington, D.C., Seahawk finishes a government briefing on the battle with the Cult of Aquon.  Roman meets him outside and reveals that the citizens of Neuport have voted to restores its previous name, Aquaria.  As they board a plane back to New York, Seahawk confesses he is still afraid to become a superhero again.  At the New York Public Library, Supreme reads old articles about his relationship with Glory while Vanguard flirts with some women.  They leave to meet Roman and Seahawk at an upscale restaurant.  In Aquaria, Cult member Hyaline announces his campaign to become the city sovereign.  At the restaurant, Supreme and Vanguard get drunk and begin to fight.  Later, Glory and Troll arrive to find Roman and Seahawk drunk as well and the restaurant trashed.  Drakkus bursts in through a window and attacks.  While it keeps the rest of Brigade busy, Haunt arrives and confronts Seahawk.  After knocking out the rest of the team, Haunt torments Seahawk over his recent inaction.  Angry, Seahawk lunges at Haunt, and Haunt teleports away with Drakkus, warning that he will return.  When Glory notes how he fought back, Seahawk says he did it to honor Shadowhawk.