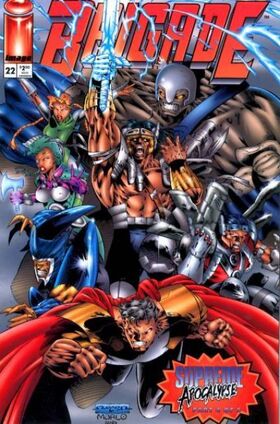 On D’khay, Darkthornn and his minion D’Archangel monitor the progress of his forces’ invasion of Earth.  In Washington, D.C., Roman takes on Darkthornn’s agent Rott while Glory, Hatchet, Kid Supreme, and Vanguard battle the mind-controlled Prophet and Darkthornn’s Disciples.  The portal the Disciples are emerging from is in the Reflecting Pool.  Troll has Glory tear electric cables out of the ground and put their sparking ends into the pool, shocking the Disciples and temporarily blocking the portal.  Back on D’khay, Supreme fights Darkthornn, but Darkthornn seemingly kills him. While the other Berzerkers fight the horde of Disciples, Cross makes his way into Darkthornn’s fortress and frees the captive Dr. Horatio Wells.  Wells then has Cross retrieve Prophet’s black box from a wall safe.  Outside, Darkthornn orders his Disciples to blast the portal reopen.  They emerge on Earth and attack Brigade.  On D’khay, Wells uses the black box to revive Supreme.  Having shaken off Darkthornn’s conditioning, Prophet fights with Brigade. Just as a Disciple is about to drown Kid Supreme in the pool, Supreme flies out of the portal and announces his return.