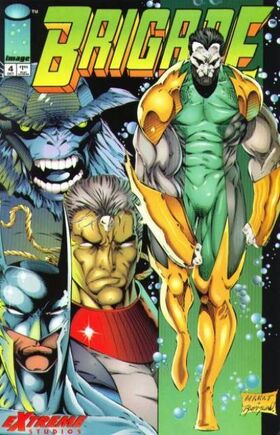 Six weeks after their battle with Bloodstrike, the members of Brigade have moved into Battlestone’s Caribbean island safehouse.  Stone catches Kayo packing his things, and Kayo explains he is leaving the team to deal with personal matters in Japan.  Stone then finds Lethal sparring with Boone, and she curtly says she is leaving, too.  Meanwhile, Coldsnap talks with Thermal about the challenges of his new ice form. Seahawk is training with Martin Grant when Roman bursts in through a window.  Despite Battlestone telling him not to, Seahawk attacks.  The rest of the team soon joins him, but Roman fends them all off and asks to explain why he has come.

A week after leaving Brigade, Lethal fights her way through armored bodyguards to her latest assassination target.  He explains this assignment was a test of her skills, and he hires her to go after Kayo.

Retrieved from "https://imagecomics.fandom.com/wiki/Brigade_Vol_2_4?oldid=73690"
Community content is available under CC-BY-SA unless otherwise noted.