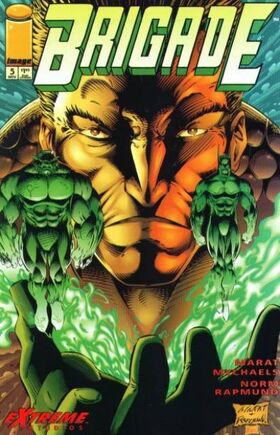 Appearing in "It's a Very Deep Sea"

Plot Synopsis for "It's a Very Deep Sea"

Roman asks for Battlestone’s help.  Stone recalls fighting alongside Roman in the Allies during World War II until Roman quit over his personality conflict with their teammate SuperPatriot.  Roman further requests the aid of Coldsnap and Seahawk, specifically to help their father who is still alive.  The two brothers are outraged and disbelieving until Battlestone tells them to shut up.  Suddenly, the Elite Guard of Roman’s enemy Worlok burst in and attack.  Brigade fights them until Roman singlehandedly beats them all to a pulp.  Afterward, Roman explains that Worlok has overrun his undersea kingdom of Neuport and aims to conquer the surface world as well.  Battlestone agrees to help, and the team leaves with Roman.  Thermal stays behind because her powers are useless underwater.  She calls her editor who berates her for not filing her story on Brigade.  In Tokyo, Kayo kills a man sitting in an office.

Hacker returns to his home in Stockton, California and checks his answering machine.  As it plays back several recorded messages, he answers a knock at the door only to be knocked unconscious and kidnapped.