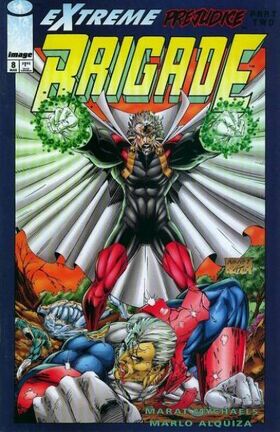 Decades ago, Quantum constructed his base New Haven in northern Canada as a refuge for those like him with the Nu-Gene that grants superhuman powers.  In the present, he walks through New Haven’s ruins and vows revenge on humanity. At Brigade’s island headquarters, the team is enjoying some downtime when Quantum arrives and asks Battlestone, who is his son, to join him.  Stone angrily refuses.  In New Jersey, David Proctor visits a Princeton University professor who was once a member of the New Men and asks his help in stopping Quantum.  The professor declines, but his student Lisa Richards volunteers. At Youngblood headquarters, Sentinel learns Quantum is in the Caribbean and remembers that Battlestone has a safehouse there.  He then contacts Stone’s brother, Cabbot.  Battlestone recalls his tumultuous relationship with his father, Quantum’s eventual defeat, and the death of his mother.  He orders Brigade to attack, but Quantum easily repels them all and tells Stone to stay out of his way.  At a Virginia prison, the soldier who freed Quantum is dubbed a traitor to humanity and murdered by an agent of the Brotherhood of Man.

White contacts Black’s valet Brookes Grey for information on Black’s father Alexander.  He equivocates so she decides to obtain Alexander’s file on her own.