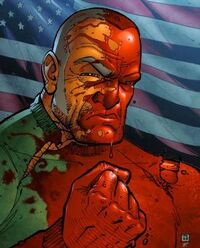 Brit had ingested a serum made by his father that made him invulnerable. He is a soldier as well as a successful topless bar owner.

Retrieved from "https://imagecomics.fandom.com/wiki/Brit?oldid=62985"
Community content is available under CC-BY-SA unless otherwise noted.