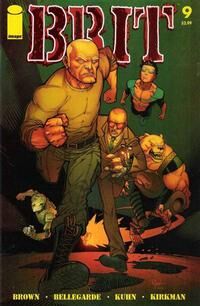 The issue begins with Ms. Popper and Bob having a dinner date on top of the Great Wall of China. They notice what looks like a shooting star go by above them. Something about it makes Ms. Popper look really scared.

Flying above Earth, the shooting star turns out to be The Emperor. He uses technology to hide his approach and flies down to find the fugitives from his dimension and to figure out why they chose to come to this planet.

At a secret government prison, Brit heads in to visit Slitter. Brit demands to know if Slitter did something to his son. But Slitter is still foaming at the mouth and can't form any words.

Brit gets teleported back to the Pentagon by Ms. Popper. He meets Jessica there and they head in to see their son after the government doctors have run a bunch of tests on him. The baby now has tentacles for both arms. Jessica ask if that is actually their baby.

Cecil tells her that it is not their son. It was made to look like him but it doesn't have any of Brittany, Jr.'s DNA. Cecil tells them that he will devote all his available resources to searching for their real son.

Jessica turns to Brit and tells him that she thought this was over. Even though she was angry with him he was back and she thought they would be okay and she would have her family back. But now their son is gone. Brit gives her a hug and tells her things will be okay. He'll fix this and keep them together.

Cecil pulls Brit to the side and tells Brit that the baby does have his DNA. This makes Brit even more sure that Slitter was involved. Donald tells him that they haven't found anything in Slitter's files. Britney tells Brit there is something he needs to know about. But before she can explain the alarms go off in the building.

The Emperor comes into the room and looks at Donald and says he's found him and shots him with a laser that cuts him in half. Britney attacks but he easily tosses her to the side. He says they can't stop him from getting what he came for. Ms. Popper teleports Cecil and Jessica out of the room. Brit tells The Emperor that he's made a big mistake.

The Emperor calls Brit a blast from the past. He tells Brit that Brit doesn't know him but he knows Brit. He hits Brit with a big piece of machinery. He knows it won't harm Brit but it traps him and he can't move. The Emperor tears Donald's head off and takes it with him as he leaves.

Ms. Popper returns and helps Britney dig Brit out. Brit tells them that the guy took Donald's head but his tracking chip is still active and they should be able to find him. Ms. Popper informs them that the guy's name is The Emperor and that he'll already have blocked Donald's tracking signal. But she knows exactly where he going and they have to warn them that he's on his way.

Ms. Popper continues to explain that The Emperor is from an alternate Earth and that she is actually from the same one. On her Earth The Emperor is the absolute ruler and millions have died by his hand. When she learned that she could teleport between dimensions she thought she was free of The Emperor.

She tells them that the resistance found her and contacted her and threatened to tell The Emperor of her existence if she didn't help them. They wanted her to find worlds with timelines where Donald had become an android. She tells them the resistance is on this Earth now. If The Emperor came after Donald then he must know their plans and will be going after them now. They need to warn them and save Donald. Britney and Brit agree and they teleport.

On the island in the Pacific Rim, The Emperor has arrived and is attacking the resistance. He points at the chip in the Robot gauntlet and tells Susan that if she gives him the device he'll allow them to live out their lives on this world. But she refuses.

Brit, Britney, and Ms. Popper arrive and are surprised to find Susan alive not knowing she's not Brit's ex-wife. They distract her and The Emperor blasts her hand off and destroys the Robot gauntlet. He also blasts the gun they were going to use to shot themselves into the portal with. He says they won't be using it to return to their world.

He then blasts the ground to start a volcanic eruption and teleports back to his own world with Donald's head. Brit tries to get an almost unconscious Ms. Popper to teleport them away as lava begins to fall all around them.