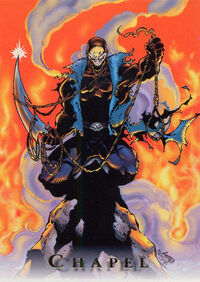 Bruce Stinson was a CIA agent before joining the super-hero team Youngblood. For many years, he worked with Al Simmons who later became Spawn.

Chapel is the tough guy of the Youngblood team. His face is covered by a skull which was painted at first but, after an encounter with Spawn, the tattoo became permanent as it were his bones marked by the hand of Spawn. Chapel uses various types of weapons, from guns to swords; and he is a formidable fighter. During the Extreme Sacrifice Saga, he killed himself after chasing Spawn and became Lord Chapel. He worked for the Devil and was willing to destroy Youngblood and his old teammates.

He is later brought back to life and assigned as Bloodstrike's field commander.