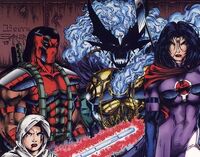 Base of Operations
Earth
Affiliations

The Cabal is a criminal organization created by Lord Helspont, aimed at world conquest and the ultimate goal of Daemonite Reunification: a return to Daemon. Their main base of operations is a submarine, known as the Behemoth. The Cabal is mostly formed by Daemonites, but it also has human members, willing to sell their own species to have a favorable position after the Daemonites take over Earth.