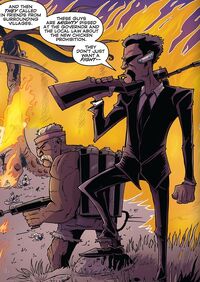 Ceasar is a skilled member of the FDA. He worked as an undercover henchman for Ray Jack Montero's illegal chicken distribution chain.[1]

Ceasar is a skilled assassin able to throw knives with pinpoint accuracy. His missed shots on Tony Chu during his raid on the Yamapalu were on purpose to protect his fellow FDA member who did not know he was undercover. He successfully caused a citizens uprising, and raised Gallus Sapadillo plants to the ground, to support his undercover boss's frog/chicken DNA splicing efforts.[2]

He ultimately had his cover blown by Tony Chu when an FDA raid was set on Montero Industries.[3]

Caesar returned to work for the FDA, however he secretly would work with his old partner Mason retrieving blood samples from Migdalo Daniel and assisting in kidnapping Olive Chu.[4]

Caesar acted as a mentor to Olive as they used her powers to attempt to thwart the Vampire's plot to steal more powers. They attempted to rescue Hershel Brown but failed. Caesar gave Hershel Brown's body parts to Olive to consume so she could learn his Xocoscalpere skills.[5]

John Colby and Michael Applebee soon got too drunk in Las Vegas and were married.[6] Caesar joined them in a family celebration. John was told he could bring anyone except Tony Chu. As a result, John invited Mason Savoy to the event. He had Caesar, Applebee, and Mason sit down and work out a deal. Mason would help them capture the Vampire Collector in return for them helping him get to the truth of the avian flu.[7]

Caesar, Mason, John, and Poyo soon headed to the Red Bear Bakery where they followed up with one of the Collector's informants. After Olive consumed one of his underlings blood, she knew exactly where to attack the Collector.[8] While they prepared to storm the compound, Tony spoke with John on the phone and told him not to attack. He knew how to take the Collector down per Toni's vision and this was not the way. Applebee ordered them to move forward with the plan anyways. The crew was quickly outmatched by the Collector. Caesar lost his arm in the battle before the Collector escaped.[9] The FDA members were saved by NASA and rushed to a nearby hospital.[10]

Valenzano was rushed to the Our Lady of the Broken Femur Hospital. Caesar and Mike Applebee were about to die. Director Penya stepped in to save Applebee's life for John. She had him reconstructed into a centaur and Valenzano remade with a lobster arm.[11]

Retrieved from "https://imagecomics.fandom.com/wiki/Caesar_Valenzano_(Chew)?oldid=53196"
Community content is available under CC-BY-SA unless otherwise noted.