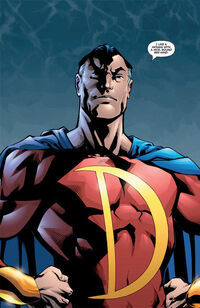 Captain Dynamo is a comic book superhero, created by writer Jay Faerber and artist Fran Bueno, who first appeared as a supporting character in Noble Causes: Extended Family #2 (June 2004 [1]) by Image Comics. He was killed by the assassin Widowmaker on the orders of Hunter Blackthorne in Noble Causes #18 (March 2006[2]), and now serves as a posthumous background concept in the monthly series Dynamo 5. Patterned in the vein of the Superman archetype, Captain Dynamo was the powerful primary protector of Tower City, and considered by his peers and benefactors to be “the greatest super-hero in the world.” [3] His death threatened to leave Tower City vulnerable to his legion of super-villain enemies, so his widow, Madeline “Maddie” Warner, tracked down and assembled Dynamo's five illegitimate children to carry on his legacy as the Dynamo 5, as seen in Dynamo 5 #1 (January 2007).

Little is known about the origin of the superhero Captain Dynamo, aside from the fact that he was the much-beloved protector of Tower City for forty years following his exposure to an unidentified form of radiation that granted him superhuman abilities, and husband of Maddie Warner, a former agent of a government superhero monitoring organization known as F.L.A.G., who used the cover of an award-winning investigative journalist, now retired. Dynamo had five superhuman abilities: flight, super strength, telepathy, shapeshifting, and laser vision, and maintained a secret headquarters beneath an industrial pier.

Dynamo was killed by the assassin Widowmaker, who was hired by Hunter Blackthorne. Dynamo was eventually found dead, naked in a hotel bed, the cause of death attributed to some type of poison on his lips, though the details of his death were not released to the public. Warner suspected that he did not find himself in that position of his own accord, but was placed in it by his murderer in order to embarrass him. His death caused an outpouring of grief in the Image universe superhero community, all or most of which was in attendance at his funeral, including the Savage Dragon, Shadowhawk II, and Invincible. In sorting through his personal effects, Warner discovered his little black book, which was filled with detailed information on countless incidents of infidelity on his part. Although devastated by the extent of her late husband’s indiscretions, Warner was faced with the problem of Dynamo’s numerous enemies, who would now take advantage of Tower City in his absence. Although other superheroes attempted to pitch in to keep the peace, Warner decided that Tower City needed a permanent protector.

Scouring through the information she gleaned from her husband’s belongings, she located five young people she believed could be his illegitimate children: Vancouver, British Columbia high school geek Hector Chang, Washington DC lawyer and activist Olivia “Livvie” Lews, aimless womanizer Spencer Bridges, Hollywood, California theater employee and NYU Film School graduate Bridget Flynn, and Eastbridge, Texas high school football star Gage Reinhart. Gathering them together, Warner exposed the five to the same radiation that Dynamo had been exposed to forty years earlier, unlocking their own latent superhuman abilities, with each one manifesting one of the five powers that their father possessed. Donning costumes with the same color scheme and design as their late father, the five of them carry on his legacy as the superhero team the Dynamo 5, while coming to terms with learning about the father they never knew, and the five new half-siblings they each now have. Although the five are unaware that Warner is a former agent of F.LA.G., she is determined to mold them not only into a team, but into a family as well, and functions as their mentor and “unofficial sixth member”, calling the shots from the same headquarters once used by Captain Dynamo, and keeping in constant remote contact with them during their missions.

Retrieved from "https://imagecomics.fandom.com/wiki/Captain_Dynamo?oldid=65957"
Community content is available under CC-BY-SA unless otherwise noted.