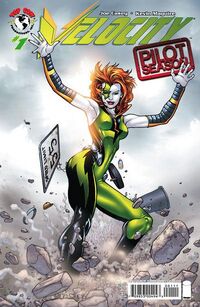 Velocity, (real name: Carin Taylor) is an Image Comics/Top Cow Productions character from the comic series Cyberforce which was created by Marc Silvestri in 1992. She is one of the main characters in the Cyberforce series, if not the main character; and often serves as the reader’s guide or eyes through the story arcs. Most of the early story arcs focused on her burgeoning friendship with the members of Cyberforce, and her struggle through meta-human teenage development. She is the younger sister of Cassie Lane, aka Ballistic.

She was cybernetically enhanced like the rest of Cyberforce, by a company called Cyberdata. Cyberdata was a global corporation with ambitions of world control. It was run by brilliant scientists who created advanced cybernetics technology and employed it with the creation of “Special Hazardous Operations Cyborgs”, or SHOCS for short. Velocity’s induction into the SHOCS program endowed her with supersonic speed and movement, much like the DC Comics character of the Flash. She was cybernetically enhanced with a layer of Kevlar implanted beneath her skin to combat the friction generated by her high speeds. Her sister Ballistic is a part-time member of Cyberforce.

At her introduction, she is sixteen years of age and a runaway from the Cyberdata forces. Initially, it was not revealed that Cassie Lane was in fact Carin’s sister. They share a different last name as their real father, Frank Taylor. After they were abandoned to an orphanage, Ballistic presumably adopted the different name to distance herself from the memory. After their father had abandoned them, both sisters wound up in an orphanage run by Mother May I, a mysterious woman with a red, third eye in the middle of her forehead. During this time, Velocity received her trademark lightning tattoo over her eye which was a gift from the resident bully of the orphanage. Soon after, she was adopted by Cyberdata through the operative called Mother May I. Mother May I was running the orphanage at the time and saw Carin’s potential for cybernetic enhancement.

Carin was then subsequently given/sold to Cyberdata.[1] It seems as though Velocity spends a fair amount of time being captured by Cyberdata and subsequently rescued, although in such shenanigans more bits of her history and possible futures are revealed; for example: in issue #11, a virtual-reality simulation shows what Velocity might have turned out like had her conversion to a S.H.O.C. been completed. She was SHOC-trained and implanted with a Brain Box, an invention of Cyberdata’s that allowed for the natural difficulties of cybernetic implants and adjustments to be overcome. Primarily, in Carin’s case, the Brain Box allowed her to run faster without overloading her brain or body with the chemicals naturally produced by the body with any muscle movement. It also allowed her to make directional adjustments to avoid obstacles when travelling at dangerously, high speeds. [2].

Despite the level of development undergone by Carin at the hands of Cyberdata, she was never transformed into a fully operational SHOC, as her psychological profile was never wiped and reinstated into a more appropriately amoral and obedient state better suited to the needs and desires of Cyberdata. Carin's memories appear not so much to have been erased as suppressed, as under duress, she starts to recover fragments of her memories. She has vignettes of her life as a child, playing ball with her sister and father while already beginning to display her power. Another vignette reveals that her father left, or died, and her mother entered into another relationship with an unnamed but abusive man. Matters come to a head one evening when her sister winds up killing this abusive man, while Carin runs at super-speed to find a police officer. As Velocity, she was taken hostage several times while also being constantly rescued and retaken by both Cyberdata and Cyberforce. Not until later in the series, does she develop more as a character capable of standing side by side with the rest of the Cyberforce characters.

In issue #30 of the first series of Cyberforce, Carin writes in her journal, hinting at a crush she has on Heatwave, (a.k.a. Dylan Cruise) although this was only construed as a mere crush, as Carin was still underage at the time. Later in the series, affections begin to manifest between Ripclaw (a.k.a. Robert Bearclaw/Berresford) and Carin, although this was never realized because the comic’s first series ended shortly thereafter. The series closed with Ripclaw and Velocity heading towards Antarctica to try and find the alien technology usurped by Cyberdata which eventually led to the development of the technology which created Cyberforce and the other SHOCS. At Cyberdata’s final destruction, the company released a virus meant to kill all those on the planet infected with the alien technology found in Antarctica. In the Marc Silvestri re-introduction of Cyberforce, Ripclaw and Velocity are betrayed by the captain of the vessel they used to reach Antarctica, and flee to the ruins. Once inside, the tunnel collapses and they're buried alive. Ripclaw, weakened by the virus, is killed by the Russian Captain of the ship, and Carin kills the captain. Carin buries Ripclaw in a shallow grave and resigns herself to die. In the newest series of Cyberforce, released in June, 2006, Carin undergoes a transformation in the ruins of the alien ship which removes the tattoo scar from over her eye and gives her a new, older look. The previously established relationship between herself and Ripclaw is tentatively explored during the first story arc, where the two are seen grasping hands and holding one another.

Retrieved from "https://imagecomics.fandom.com/wiki/Carin_Taylor_(Top_Cow)?oldid=72860"
Community content is available under CC-BY-SA unless otherwise noted.