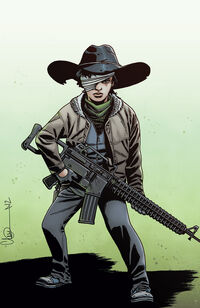 Carl Grimes is the son of Lori and Rick. He was born and grew up in Cynthana, Kentucky, where his father worked as Police Deputy.

Shortly after Rick got shot in the line of work[1], the zombie outbreak began, and Carl and Lori, accompanied by Rick's friend Shane, took off to Lori's parents' house in Atlanta, following the government's advice to take refuge in bigger cities. However, Atlanta was overrun with zombies, and they had to camp on the road. Eventually, they found a camp of survivors in the outskirts of the city, and they joined the group. There, he made friends with Sophia, a girl of around the same age as him, and the twins Ben and Billy.

A month after joining the group, Carl's father woke up from his coma and made his way to the camp.[2] After the group acquired more guns thanks to Rick and Glenn, Carl was taught how to shoot, but with the warning that he should always keep the gun in its holster, and only take it out in emergencies. If Rick found him needlessly using it, he would take it from him. Eventually, Carl saw the opportunity to use the gun and save his mom during a zombie attack.[3] When Shane snapped at Rick and attempted to kill him, Carl saved his dad and shot Shane in the neck, killing him. That event scared Carl, and he discovered that killing humans is "not the same as killing the dead ones."[4]

The group had to lift camp and hit the road, moving from one location to another. With food and supplies running low, Carl accompanied his dad and the newcomer Tyreese to hunt. However, a man named Otis mistook them for zombies and shot Carl accidentally.[5] Rick snapped and almost killed the shooter, but the he offered them to take the boy to the farm where he was staying in, where someone could take care of the wound. So Rick carried the unconscious Carl all the way to Hershel's Farm, where Hershel Greene saved his life.[6]