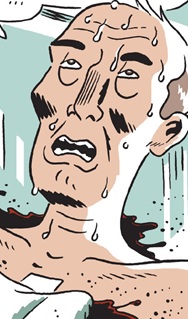 Ricci Salvatore worked with the mob to move jewelry out of town. In his early years, he murdered Dom Castella by riding past him on a motorcycle and shooting him in the face when he waves.

Ricci was re-payed the favor and was shot in the face by a female assassin motorcyclist while being passed on a highway. He had the jewels he was attempting to move taken by Detectives Cosh and Bludgeon.[1]

Retrieved from "https://imagecomics.fandom.com/wiki/Carlo_Ricci_(Dark_Corridor)?oldid=43310"
Community content is available under CC-BY-SA unless otherwise noted.