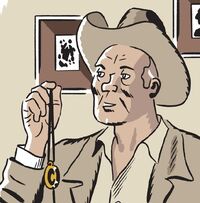 Nine years ago, Carter sat in prison. His lawyer informed him that his high-status makes his case high-profile. As a result, governor Meyer would most likely not release him as it would be seen as a favor. As Al left, his cellmate gave him a hard time. Carter snapped and smashed the cellmate's face against the urinal. He realized what he's done as his cellmate bleeds out on the floor.[1]

Carter received a phone call from Pete. He went to the Scalina's home where they had recently been murdered and stole their valuables.[2]

Carter walked into the car lot as a high roller and pays with cash.[1]

He then headed to see his brother, Jimmy. He informed him he was quitting his job as a doorman for the hotel. Jimmy was shocked as he had only worked there for 5 weeks. Carter headed out to purchase a new apartment, big screen TV, expensive alcohol, and eat at fancy restaurants. He next went to a strip club where he rang up a $9,000 bill.[1]

The next day at 4am, Carter woke up where he passed out at the strip club stage. He saw a news report that Carlo Ricci has been murdered. He realized he's in trouble as he was the guy would could move his diamonds. Since he was now broke, he attempted to make a break for it, but had to shoot the strip club manager in the face in the process.[1]

Retrieved from "https://imagecomics.fandom.com/wiki/Carter_(Dark_Corridor)?oldid=45496"
Community content is available under CC-BY-SA unless otherwise noted.