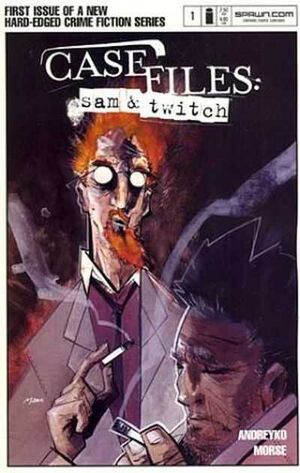 Appearing in "Have you seen me? Part 1"


Plot Synopsis for "Have you seen me? Part 1"

Twitch Williams prepares for the day as it is his first day off in a long time. Helen Williams bursts into the bathroom and discovers he hasn't even showered. She hands him a list of errands to run on his free time. She prepares to leave for her first day on the job, and Twitch kisses her as she leaves through the door. He looks at the list and see pick up Lauren Williams as one of the tasks. He suddenly gets a phone call from Sam Burke asking what they're going to do on their day off. He convinces Twitch to meet him for food. Meanwhile at school, Lauren engages in a lewd conversation with her friends about the size of man's package. She's asked to help put baggage in a man's car. She agrees to help but is suddenly attacked and shoved in the car and kidnapped.

Later, Twitch sits in Lauren's room, awaiting to go to the funeral of his daughter. His wife brings him his suit to put on. He later sits at the funeral with his family and grieves the loss of Lauren during the service. Sam and several officer support him and his family in their time of need. Twitch walks the casket and places it in the hearse to be taken and shuts the door without saying a word.

Later, Twitch sits in the jail cell. Sam enters the room and greets him. He asks Twitch how he's holding up. Soon, Timothy Champion, a renowned attorney, enters the cell and introduces himself as Twitch's new attorney. Sam admits to hiring him as he was concerned. Champion informs them the new mayor is cracking down and wants to prove he runs a clean police force. They're going to use Twitch as an example. He coaches Twitch on their defense of in the moment and tells him he needs to look more concerned. Twitch lashes out in anger and kicks the man out. Sam escorts the attorney out and tells the guards to take care of Twitch as he's one of our own.

This is the second spinoff book featuring New York City police detectives Sam Burke and Twitch Williams, popular characters originally introduced in the core Spawn title. Casefiles: Sam and Twitch takes the crime noir world of Sam and Twitch to a darker level, feature unique artwork and storytelling from Marc Andreyko and Scott Morse. This issue: "Have You Seen Me?" Part 1 (of 6) In the all-new Sam and Twitch monthly book, Eisner- and Harvey-nominated creators Marc Andreyko and Scott Morse take our intrepid detectives on a journey that will leave S&T changed forever! Twitch's past-like a boomerang-comes careening back to haunt not only him, but those he loves (and has loved)! No one is safe from the brutal vengeance ofS aww, now that would be telling! With exciting painted and pen-and-ink artwork from Scott Morse and a nail-biting script by Marc Andreyko, the six-issue arc "Have You Seen Me?" will leave your jaw on the floor!

Retrieved from "https://imagecomics.fandom.com/wiki/Case_Files:_Sam_and_Twitch_Vol_1_1?oldid=43203"
Community content is available under CC-BY-SA unless otherwise noted.