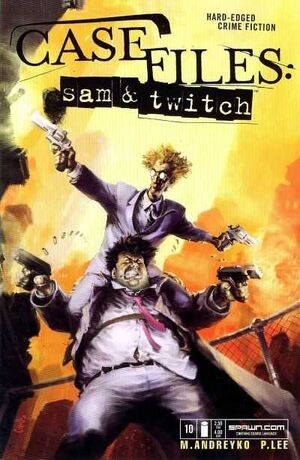 Seamus Halloran greases the wheels with Chief Tommy to let his man, Bobby Kellerman, walk. Twitch Williams rushes to grab the cigarette that Kellerman threw in the trash earlier. He sends it out for DNA matching to Gordy.

23 years ago, Sam Burke returned to his dorm room. Peter Draven left as they had an awkward exchange of not talking about the homosexual discovery and the payoff offer from Seamus. Sam stares at his money and wonders what to do with it.

In the present, Seamus accosts Kellerman for his sloppy work. He orders him to hurry up and kill Sam and Pete to clean up loose ends.

At Sam's apartment, Pete hears Sam and Twitch enter the room. They tell him he's in danger as Kellerman has been released and they'll probably figure out the connection and come looking for him next. Twitch hands him a cell phone so that he can contact them if anything goes wrong. Twitch drives him to a place he describes as the last place on earth anyone will search for him. He drops him off with Ambrosia, a local hooker and told to lay low.

Elsewhere, Sam bursts into Seamus office unannounced. Sam drops a $25,000 payment to a gay charity as repayment for when Seamus attempted to buy his silence. After Sam leaves, Seamus calls Kellerman and orders him to kill Sam.

Retrieved from "https://imagecomics.fandom.com/wiki/Case_Files:_Sam_and_Twitch_Vol_1_10?oldid=67807"
Community content is available under CC-BY-SA unless otherwise noted.