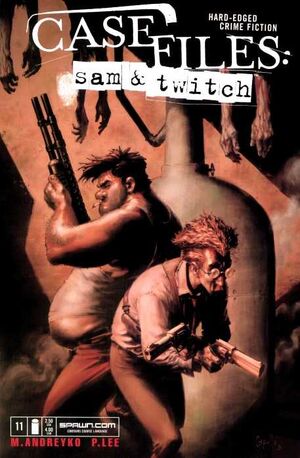 Peter Draven has a dream of Bobby Kellerman breaking into his room and attacking him. He wakes up from his dream as Ambrosia bursts into the room to check on how he's doing. As he lays on the floor in a cold sweat, he asks her if she has a gun.

Meanwhile, Gordy Quincy calls Twitch Williams with the results of his cigarette DNA test. He tells him it's a match. Twitch dials up Sam Burke to tell him that it's confirmed to be Kellerman's DNA they found in the bathroom. Sam hops in the Crimemobile to head out to try and locate Kellerman. He sees he is being trailed by Kellerman at the same time.

At the apartment, Ambrosia makes a pass at Peter but is rejected. She gives him the gun he requested and steals a kiss from him. She tells him they're even now.

Later, Sean Halloran makes a statement to the press that he's said in regards to what happened with their personal family security guard. He promises full cooperation in any investigation and steps of the podium. As he leaves backstage with his father, he snaps on him. He demands to know what's going on. His father tells him to stand down.

Meanwhile, Ambrosia calls Twitch and tells him he ran away. She tells him she gave him a gun and Twitch becomes worried he'll do something stupid with the gun.

Retrieved from "https://imagecomics.fandom.com/wiki/Case_Files:_Sam_and_Twitch_Vol_1_11?oldid=43223"
Community content is available under CC-BY-SA unless otherwise noted.