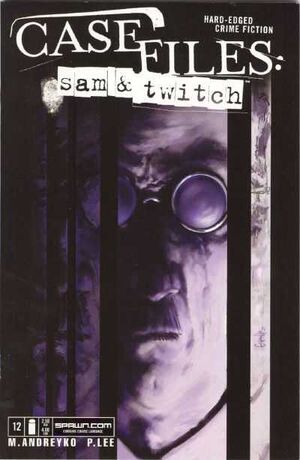 Appearing in "Skeletons, Part 6: The Conclusion"

Sam Burke and Twitch Williams approach Ambrosia and the other hookers. Ambrosia informs them she gave Peter Draven a gun right before he left. Sam realizes he's going to do something stupid and tells Twitch they need to move fast to find him first and stop him.

Elsewhere, Peter spots a UPS delivery man. He pulls him into an alley at gunpoint and knocks the man out. He donns the clothes and heads to Sean Halloran's home. When Sean opens the door, Peter pulls the gun and lets himself in.

Seamus Halloran makes lewd comments to Rachel Halloran in the next room. When they hear Pete yelling at Sean next door, Seamus sneaks in to investigate.

Pete holds his gun to Sean's head and demands to know how many of his lovers he ordered to have murdered. Sean continues to plea he doesn't know what he's talking about. Seamus knocks Pete down with a pot from behind. He orders his son to grow a pair and shoot Pete to close the loophole. He orders Rachel in to watch. When Sean at first refuses, Seamus becomes upset. He tells him he always has to do everything for him, include give him a son when he couldn't. Seamus keeps pushing Sean and eventually calls him a, "Faggot". Sean finally pulls the trigger.

Sam and Twitch arrive and rush upstairs to investigate. As they enter the room, Rachel tells them that a strange man infiltrated and shot Seamus. No one tells the truth of Sean pulling the trigger to kill his father.

Later, Pete throws his outfit in the fire and gun in the river. He heads to meet Sam at the park. He dumps the body of his cremated boyfriend, Rob, in the river. Sam jokes he promises not to report him for illegally dumping remains in public.

Retrieved from "https://imagecomics.fandom.com/wiki/Case_Files:_Sam_and_Twitch_Vol_1_12?oldid=43222"
Community content is available under CC-BY-SA unless otherwise noted.