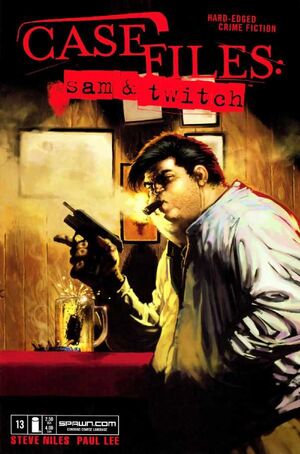 This is the second spin-off book featuring New York City police detectives Sam Burke and Twitch Williams, popular characters originally introduced in SPAWN. CASE FILES: SAM & TWITCH takes the crime noir world of Sam and Twitch to a darker level. "Cops and Robbers" - Everyone has a secret, and detective Sam Burke's weighs on him constantly. It's a ghost: a phantom of regret, bad choices and a life that should have been better. Now, after years of avoidance, the ghost has come home.

Retrieved from "https://imagecomics.fandom.com/wiki/Case_Files:_Sam_and_Twitch_Vol_1_13?oldid=42794"
Community content is available under CC-BY-SA unless otherwise noted.