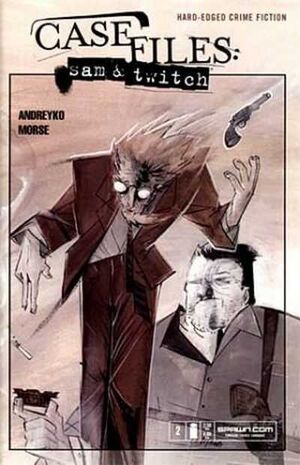 Appearing in "Have you seen me? Part 2"


Plot Synopsis for "Have you seen me? Part 2"

At the crime scene, the police discover Lauren Williams' school girl outfit. There is blood on the shirt. Twitch Williams barks out several orders to capture evidence. Meanwhile at home, Helen Williams calls Twitch and asks for a status update. Suddenly, a wooden box is thrown through the window. She opens it to find a picture of Lauren and her severed arm inside. Twitch rushes from the scene to return home to his wife.

Later after the funeral, Twitch and Helen leave in the hearse. Twitch excuses himself to go talk with Sam Burke. He bums a cigarette and smokes it for the first time due to the stress. He peers across the way and thinks he spots K.C. McRory. He chases after her and stumbles upon a grave that has been lifted out of the ground. he pulls open the door and finds a body with the word, "Udaku" written on the forehead.

Days later in the prison, Twitch is ushered into the shower area with several other inmates. They joke with him and call him pretty and drop a bar of soap. When they tell him to pick it up, he does but chucks it right into one of their nuts. They brawl and Twitch beats them back ferociously until he's the last one standing.

This is the second spinoff book featuring New York City police detectives Sam Burke and Twitch Williams, popular characters originally introduced in the core Spawn title. Casefiles: Sam and Twitch takes the crime noir world of Sam and Twitch to a darker level, featuring unique artwork and storytelling from Marc Andreyko and Scott Morse. Intended for mature audiences only. Twitch's life is shattered as ghosts from the past return for vengeance! And no one Twitch knows is safe --- not his friends, his partner, his children! As the horrors inflicted on Twitch get greater, will he crack under the stress? And will he turn to cold- blooded murder to stop it?

Retrieved from "https://imagecomics.fandom.com/wiki/Case_Files:_Sam_and_Twitch_Vol_1_2?oldid=43204"
Community content is available under CC-BY-SA unless otherwise noted.