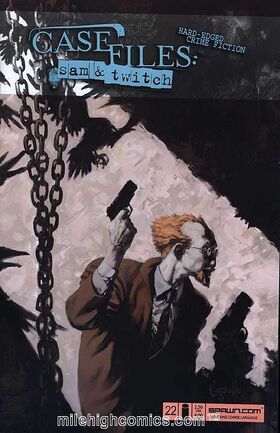 Appearing in "Fathers and Daughters, Part 3"

Sam Burke and Twitch Williams discuss the death of Lacey Lyons. Twitch says he doesn't know how much more he can take with the recent deaths of his children. They're both called down to the M.E. office.

Meanwhile, the Lyons family hold a press conference where Hanson Lyons reads a statement of regret about their daughter's death.

Twitch and Sam view a dead body in the morgue of a gunshop owner. They are then brought to Lacey and learn she died from lack of air. Her windpipe had been crushed and she had been sexually violated in the vagina and rectum post-death. The strangulation marks indicate a smaller set of hands and all evidence had been whipped clean from her body. They also learn the ransom note left at her house had been written multiple times, in a rushed manner. The killer also used their other hand as they clearly did not premeditate the ransom note. The M.E. tells them the ink was expensive, and worded similar to a Hollywood contract. Twitch suspects it was Hanson as he had a special on TV recently about how he collected pens. They wonder if the wife was in on it as the hands were from a smaller individual.

As they leave the station, Hanson approaches them and belligerently orders the release of his daughter's body. He claims since they are Jewish, she needs a speedy burial. Sam exchanges words with him and tells him they need the body to complete research and bring the killer to justice.

Meanwhile at the station, Sylvester walks in and claims he is the killer of Lacey to the police secretary.

Retrieved from "https://imagecomics.fandom.com/wiki/Case_Files:_Sam_and_Twitch_Vol_1_22?oldid=67808"
Community content is available under CC-BY-SA unless otherwise noted.