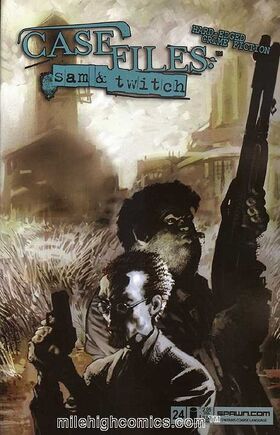 Appearing in "Fathers and Daughters, Part 5"

Twitch Williams gives Mitchell a hard time. He's hesitant to believe he's not just seeking fame and really wants to help them with their Lacey Lyons case. Eventually he gives them the lead of Lorraine Davies.

Sam Burke and Twitch head to Serenity Glen, a care-taker home where Lorraine Davies is being taken care of. She welcomes them and tells them she knew they were coming as Mitchell had told her. She tells them everything about Hanson's past and how he abused and molested her children. She allows them to exhume Julia's body for evidence.

Later, Sam and Twitch receive a call from the M.E. They learn she had been abused physically and sexually. They find evidence that the kid attempted to take her own life long before she actually died and realize she lived a tortured and difficult life.

In New York City, Hanson Lyons broadcasts himself taking a lie detector test showing he did not kill Lacey. The D.A. orders Twitch to march over to Hanson's home and arrest him in front of newscasters.

Retrieved from "https://imagecomics.fandom.com/wiki/Case_Files:_Sam_and_Twitch_Vol_1_24?oldid=67810"
Community content is available under CC-BY-SA unless otherwise noted.