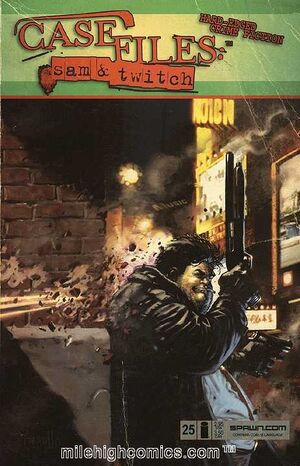 Appearing in "Fathers and Daughters, Part 6"

Sam Burke and Twitch Williams interrogate Jennifer Lyons. She refuses to give them information. They turn their attention to Flynn Lyons who admits their father was abusive and a molester. He tells them that when Jennifer attempted to take Flynn and escape from him finally seeing him as the monster he is, he started to attack her. In self-defense, Flynn grabbed the gun and murdered Hanson, freeing them from their persecution.

Meanwhile at Twitch's home, Twitch and Helen Williams tuck in their daughters. A sudden knock at the door annoys them as they assume it is Sam knocking at such a late hour. However, they open the door and find their assumed dead daughter, Lauren Williams,[1] at the door. They hug her and let her back into their home and lives.

Retrieved from "https://imagecomics.fandom.com/wiki/Case_Files:_Sam_and_Twitch_Vol_1_25?oldid=49132"
Community content is available under CC-BY-SA unless otherwise noted.