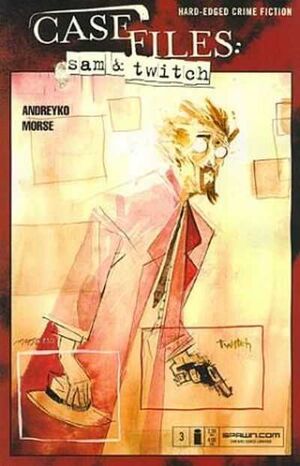 Appearing in "Have you seen me? Part 3"


Plot Synopsis for "Have you seen me? Part 3"

Twitch Williams talks with Oswald, the medical examiner. Oswald tells him the body part was severed from a 14-17 year old girl but he doesn't know if it is Lauren Williams. He explains it appears to have been cut from the person while they were still alive. Twitch pulls out old fingerprint records on his daughter. He tells Oswald he had them when he did a show-and-tell during her 5th grade class. Twitch has a vision of his daughter being captured and taunted. He snaps out of it when Sam Burke asks if he's ok.

Two detectives stop by Twitch's home. Helen Williams listens as the detectives ask about seeing his ex-flame, K.C. McRory at the funeral the other day. As she listens, she becomes more upset and eventually leaves the house. Sam Burke walks in and tells him they should pull the old Udaku files. The two visiting detectives tell them they can't pull those files as it is just a vandalism of corpse case at this point in time. Twitch walks Sam out of the house but suddenly receives a phone call. He answers it and a man asks him if it hurts to loose a child.

Timothy Champion visits Twitch in prison. After blabbering about what he thinks should be done, Twitch explodes and gains his attention. He orders his kids stay out of the case, and to cut the theatrics. Tim levels with him that there is someone close to him that will make his case more difficult.

Elsewhere, Sam gets a hotdog from a street vender. Man serves him a letter to appear in the case of the State vs. Williams as a key witness.

This is the second spinoff book featuring New York City police detectives Sam Burke and Twitch Williams, popular characters originally introduced in the core Spawn title. Casefiles: Sam and Twitch takes the crime noir world of Sam and Twitch to a darker level, feature unique artwork and storytelling from Marc Andreyko and Scott Morse. Intended for mature audiences only. Art shown is the cover "Have You Seen Me, Part 3?" Part 3 of 6-part story arc, As Twitch reels from the reappearance of someone long thought dead, another body blow strikes -- an event so tragic and life-changing that it will change the lives of Sam and Twitch forever. Det. Twitch Williams on trial for first-degree murder? And the star witness? Sam!

Retrieved from "https://imagecomics.fandom.com/wiki/Case_Files:_Sam_and_Twitch_Vol_1_3?oldid=43205"
Community content is available under CC-BY-SA unless otherwise noted.