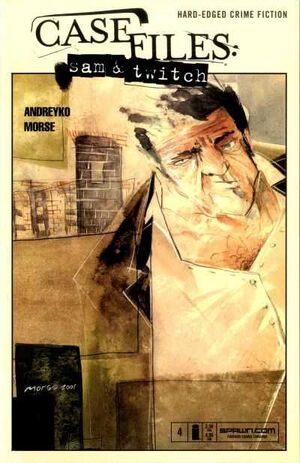 Appearing in "Have you seen me? Part 4"

Plot Synopsis for "Have you seen me? Part 4"

Twitch Williams asks Helen Williams to take the kids and leave town while they search for Lauren Williams. Lauren tells Max she's leaving and she doesn't want to see him again until there is news on Lauren.

Twitch picks up the phone call. The man tells him to not bother looking for him. He will only make himself available when he's ready. Twitch begins taunting the man and reminds him how he killed his daughter Cecilia Udaku. The man orders his driver to peel out around the corner and hit him. Twitch dodges out of the way and takes several shots at the vehicle. He suddenly sees the driver is K.C. McRory, his old flame. The car escapes and Twitch spots a diplomat license plate that fell off the vehicle.

Sam Burke waits in the prison cell with Twitch. He tries to get him to come up with a story but Twitch tells him just to tell the truth.

This is the second spinoff book featuring New York City police detectives Sam Burke and Twitch Williams, popular characters originally introduced in the core Spawn title. Casefiles: Sam and Twitch takes the crime noir world of Sam and Twitch to a darker level, feature unique artwork and storytelling from Marc Andreyko and Scott Morse. "Have You Seen Me, Part 4?" of 6-part story arc. Twitch's descent into madness continues as his reality is shattered by tragedy after tragedy. After two staggering losses, can it get any worse for the detective? The answer is YES! While his family reels at the pain that seems to never stop, an unwelcome visitor appears: an old girlfriend of Sam's! The trouble is ... she's been dead for years!

Retrieved from "https://imagecomics.fandom.com/wiki/Case_Files:_Sam_and_Twitch_Vol_1_4?oldid=43206"
Community content is available under CC-BY-SA unless otherwise noted.