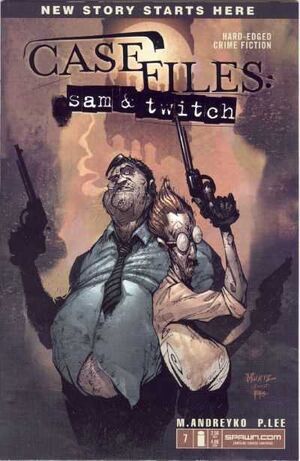 Senator Sean Halloran leaves the hospital with his wife and newborn child. He's accosted by the media who beg questions of the recent allegations that he is a homosexual. As a candidate for president of the United States of America, he denies the allegations and ushers his new family into the car.

Meanwhile at his home, Rob watches the interview on TV and jests that Halloran is a robot and couldn't have children. An assassin breaks into his home and murders him. Meanwhile, he receives a call on his home answering machine from Peter Draven

Seamus Halloran, Sean's father, talks with him on the rootop about his president candidacy. He makes lewd comments about his wife and continues to push his agenda on his son. Meanwhile a papparazi takes a photo of Sean hanging his head low as he's lectured by his father.

The next morning, Twitch Williams rides in the Crimemobile with Sam Burke. He reads the story about the future president and remarks he only gets by on his good looks. Sam admits he went to the same prep school as him as a child.

Elsewhere, Peter lectures his class on fame and the allure it brings into people's lives. He's hit on by one of his attractive students. He tries to call Rob again to tell him the funny news but still doesn't get an answer.

Sean stops by his wifes room. She yells at him for putting his career first and the two leave angry with each other.

Peter returns home and hears the shower running. When he walks in and finds Rob's dead body he begins to freak out. However, she snaps out of it when he sees an assassin coming out of the closet. He reacts quickly and uses the toilet top to knock the man out as he escapes from the house. He spots on the TV the assassin standing behind Sean Halloran on TV and realizes the connection.

Peter rushes to Sam's apartment and knocks on the door. He begs Sam for help when he answers.

Retrieved from "https://imagecomics.fandom.com/wiki/Case_Files:_Sam_and_Twitch_Vol_1_7?oldid=43217"
Community content is available under CC-BY-SA unless otherwise noted.