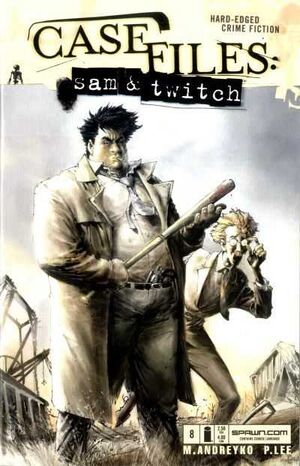 23 years ago at Whisleton Prepatory Academy, Sam Burke rushes off to class as he's running late and would flunk if his teach caught him running again. Upon arriving, he learns that class was canceled. He heads home and opens the door to his dormroom when he stumbles into Sean Halloran sleeping with his roommate Peter Draven.

In the present, Sam can hardly believe he's seeing Pete again for the first time in 23 years. Pete tells him he's gotten into trouble and needs to know he can trust him. He tells him he thinks Sean Halloran had his boyfriend murdered.[1] He says it's possible it could be his father as Sean was always complaining how controlling he could be. He tells Sam that when he was in school, his dad attempted to pay him money to stay silent about his homosexual activities with his son. Sam tells him he needs to call in his partner.

Twitch comes over after putting his daughters to sleep. Sam tells him they need to help him but keep it on the downlow as the New York City Police Department will fry the case if they find out Sam is connected to Sean from their prep academy days. Twitch tells him someone needs to check out his apartment for evidence.

The duo head to the New York City Police Headquarters. They ask the front desk worker if he's had any strange cases come in and he doesn't report anything suspicious.

They next head to Pete's apartment. They break in and find the place has been wiped nearly clean. Twitch lifts up the top of the toilet tank and finds blood and a brain skull fragment. They bag it for DNA testing.

They head to the Medical Examiner's office. They ask Gordy Quincy to run tests on the DNA but keep it quiet. As they leave the building, Twitch grills Sam for the truth. He tells him he knows he's hiding something. Sam finally admits that he was on Seamus' payroll.

Retrieved from "https://imagecomics.fandom.com/wiki/Case_Files:_Sam_and_Twitch_Vol_1_8?oldid=67805"
Community content is available under CC-BY-SA unless otherwise noted.