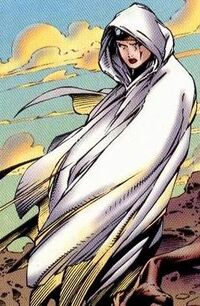 In the distant past, Omnia, Mistress of Light, would lose her final battle against the darkness, but could not be destroyed. Instead, her power was dispersed into many small Orbs of Power. One of these Orbs was bound to Cassandra Newland, who would turn into the enigmatic 'Providence'.

Providence became a member of Helspont's Cabal, acting as oracle and spiritual guide to the Cabal, and often came in conflict with the WildC.A.T.s

Some time after Helspont's defeat, Void fought Providence, who had allied with the witch Tapestry. Tapestry betrayed Providence by refusing to hand over the captive Void to her. Tapestry used her magic to merge Providence and Void, enslaving them both. Tapestry was defeated though and Providence and Void returned to normal, though now they could no longer sense each other's presence.

Retrieved from "https://imagecomics.fandom.com/wiki/Cassandra_Newland?oldid=57876"
Community content is available under CC-BY-SA unless otherwise noted.