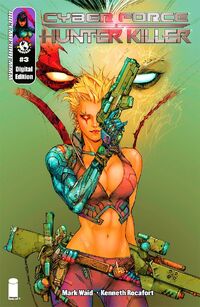 Cassandra Taylor (aka Ballistic) is a Top Cow superhero and a member of Cyberforce.

Ballistic is the sister of Velocity. Their father was a CIA agent Frank Taylor, who walked out on his family when his daughters were extremely young. Their mother shacked up with a new man (boyfriend or husband is unspecified) who was abusive and mistreated both girls, until finally Ballistic killed him defending her family.

When her mutant talent of superhuman agility and uncanny accuracy manifested, she became the star pitcher for her high school baseball team. But her ex-boyfriend Tony and a group of boys, jealous of her, attacked her and crippled her arm. Some time later she encountered Cyberdata, who replaced her damaged arm with a bionic one, and brainwashed her using a "brain box" that robbed her of her memories of her family. Ballistic became a leader of the S.H.O.C.s, who captured mutants for Cyberdata, so they could then experiment on the mutants using bionic implants. She was leading a team in pursuit of her sister, who had escaped from Cyberdata, when she first encountered Cyberforce. Her team and Cyberforce fought a number of battles over custody of Velocity, until Ballistic received a head wound that damaged her conditioning. With her memories starting to return, she had Cyberforce remove the brain box. She is now a free woman, and although she does not want to join them, she does occasionally aid them in their missions in order to ensure the safety of her sibling.

Retrieved from "https://imagecomics.fandom.com/wiki/Cassandra_Taylor_(Top_Cow)?oldid=67433"
Community content is available under CC-BY-SA unless otherwise noted.