This page lists everything categorized with a template in the Invincible Universe. 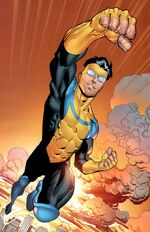 Welcome to the Image Comics Database portal dedicated to Invincible!

Invincible is the one of the longest running independent comic books. The creator, Robert Kirkman has been it's primary writer for over 140+ issues. Supported by Ryan Ottley, it is one of the few comic books to have a writer and artist team up for so many issues.

Mark Grayson was born a half-breed between a super-powered Viltrumite and a mortal woman. When his powers manifested one day in his teenage years, he became the super-powered hero Invincible.

Having run for 15 years and over 140 issues, jumping onto Invincible can be a daunting endeavor! We at the Image Comics Database recommend the following starting, jump-on, and modern start points for new readers:

Invincible #1
(January, 2003)
The issue that started it all! Read how Mark becomes "invincible"!

Invincible #0
(March, 2005)
This special "zero issue" partially recaps the first 22 issues of the series, leading up to an important moment of Mark's life in #23!

Invincible #42
(June, 2007)
As the cover shows, this issue is very new reader friendly. The single issue also contains a recap of the series up to #41 at the end.

Invincible #118
(March, 2015)
This modern start point contains a recap that will bring you up to speed on Invincible and his family!
Add a photo to this gallery

Are you a fan of Invincible and want to witness some of his greatest stories? Have you read most of the series already and want to go back to some highlights? Are you just a fan of superhero and gory comics? We recommend the single issues below (based on professional opinion), and the major Invincible events below that!

Invincible #7
(December, 2003)
Meet the Guardians of the Globe: the Image Comics version of the JLA. A major turning point story!

Invincible #40
(April, 2007)
Parallel Threats! Huge Losses! This is what the series is all about!

Invincible #84
(October, 2011)
Invincible grapples with a moral dilemna: should he free and work with a mass murderer in order to eventually save the planet?

Invincible #110
(April 9, 2014)
One of the most controversial stories in all of Invincible's history. Anissa does the unthinkable.
Add a photo to this gallery

Invincible: Perfect Strangers Turning Point! The defining moment of Invincible! Why were the Guardians of the Globe killed? What is the true extent of Invincible's powers? This shifts the comic from parody to tragedy.

Invincible: Invincible War Invincible joins the many heroes of Image Comics to fight against an army of his evil counterparts from another dimension, unleashed.

Invincible: Viltrumite War Destruction on a cosmic scale! The Viltrumite War finally begins! It's even more devastating than the last two events combined!

Invincible: Death of Everyone Leading up to Invincible's 100th issue. Millions die. This is not your father's superhero comic.

Invincible: The End of All Things The final 12 issues of Invincible. You thought the last two events were a lot? Prepare to cry. A lot.
Add a photo to this gallery

I
Retrieved from "https://imagecomics.fandom.com/wiki/Category:Invincible?oldid=62923"
Community content is available under CC-BY-SA unless otherwise noted.