This page lists everything categorized with a template in the Spawn Universe. 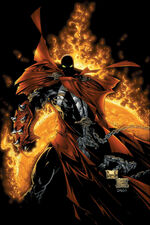 Welcome to the Image Comics Wiki portal dedicated to Spawn!

Spawn is the second-longest running, independent comic book. The creator, Todd McFarlane, has commented that he doesn't plan on stopping until it is the longest run independent comic book (301+ issues to beat Dave Sims).[1] While many of the issues had featured legendary artist, Greg Capullo at the helm, the reigns have recently been passed on to Jonboy Meyers who has taken hold for a new, edgier and aggressive Spawn.

Spawn was wildly successful from its launch date and began several spin-off series (Angela, Sam and Twitch, Curse of the Spawn) that has featured Spawn Supporting Cast members and Spawn Villains. The main title is Spawn Vol 1 with a recent reboot in issue Spawn Vol 1 Resurrection.

The franchise has expanded to a Spawn film, an HBO TV series, Toyline, Video Game, and a recently announced animated series in the works.[2]

In the desolate backdrop of New York City, an eternal war of Heaven and Hell rages on. Every 400 years, Hell pits Hellspawn to the living realm to fight their wars for them. What happens when that Hellspawn no longer plays by the rules and invents his own?

Al Simmons wanted to return to his life and made a deal with Malebolgia to exchange his soul to return to earth. Things are never so simple, and Al becomes the anti-hero Spawn, as he finds the world is twisted and manipulated by the opposing forces of Heaven and Hell.

Having run for a long time, jumping onto Spawn can be a difficult endeavor. While you can pick up and start reading, it's not uncommon for some threads to go unanswered for 30-50 issues! That's an incredibly long time, but can also be incredible rewarding for those sitting along for the journey.

Spawn #1
(May, 1992)
The best place to start to get the full experience, read how Al starts his Journey!

Spawn #185
(October, 2008)
The easiest place to jump on in the middle of the run was when Jim Downing mysteriously woke up after an event. Find out how he takes over the Spawn mantel for several years.

Spawn #Resurrection
(March, 2015)
Al is back and this time powered with God's sword?! Read more to find out what happens!
Add a photo to this gallery

Quoted as one of Todd McFarlane's most proud stories, how does Spawn deal with child abuse?

The world is full of men who will march into hell for a pretty girl, but it's the good ones who will open the gates of heaven for her.

Every great series must have the Rashoman tales. Hear a story told from 3 points of view, but does Spawn know the real story?

Add a photo to this gallery

The Kingdom: New author Brian Holguin takes Spawn on a seven-issue ride that results in a big impact on Twitch Williams' life.
Add a photo to this gallery