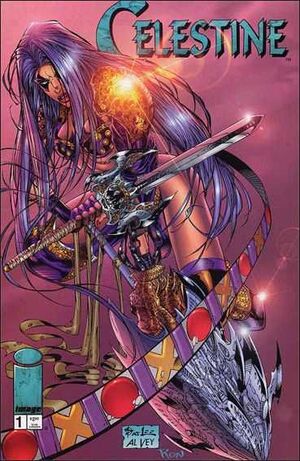 Celestine is reborn from her death in Hell.[1] A demon attempts to show her the way as her guide but Celestine attacks him and is infuriated that they think she needs a guide. She is quickly over-powered as she is now in Hell. She is given a tour but does not recognize it as the Hell she knows.

On Earth, Joseph Yallod walks out of the Whiteside Parsons Institute with Celestine's remains in a bag. Naamah appears at the institute and demands to know where Yallod is located.

Yallod returns to his apartment and begins a spell to resurrect Celestine. Naamah calls someone on the phone to report on Yallod's actions. She warns the unknown person on the phone that he could bring Celestine back but she could be brain damaged due to some miscalculations. Naamah is suddenly stopped by Angels outside the phone booth.

Celestine is brought to someone who claims to rule Hell, though it is not the one she is familiar with. She's told to think back to all those she's destroyed and think about where the Angels went when they had been murdered. The Devil explains she had now gone to the same place as killing is still killing, and this is a type of Hell.

Retrieved from "https://imagecomics.fandom.com/wiki/Celestine_Vol_1_1?oldid=38656"
Community content is available under CC-BY-SA unless otherwise noted.