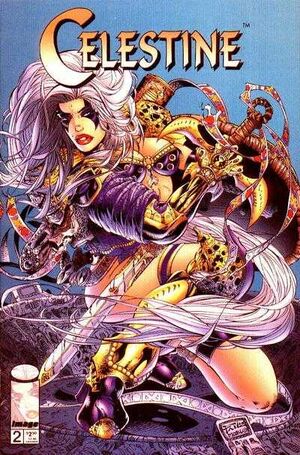 The Devil leaves Celestine as she heads of to more important matters.

Meanwhile at the phone booth, Naamah tells the Angels lies that she is only a student. The Angels see right through her and inform her they know she is a servant to the Devil. They surprisingly announce they will help her as Celestine had become too violent to stay in Heaven.

Meanwhile, Joseph Yallod has already started his spell to bring back Celestine from the dead. A door to Hell begins to open.

Outside, the Angels prepare to attack Yallod and clear the way of his magical traps. Naamah double crosses the Angels and murders them when they aren't looking. Yallod announces his plans to marry and mate with Celestine. Naamah is disgusted to learn this and finds she can't stop his magic items or spell. She turns to Yallod and kills him instead, stopping his spells from bringing Celestine back.

Celestine is horrified as she remains trapped in Hell.

Retrieved from "https://imagecomics.fandom.com/wiki/Celestine_Vol_1_2?oldid=38657"
Community content is available under CC-BY-SA unless otherwise noted.